The Teachers Service Commission, TSC, says about 300,000 teachers submitted their applications to fill the advertised 11,000 vacancies in primary and secondary schools. The new job seekers almost equal those already in the Commission payroll.

The high number of applicants must have been due to applications made by teachers in private schools who have undergone turbulent times during the Covid19 break.

The large numbers must have occasioned the delayed release of the merit lists.

“The numbers were overwhelming, There are so many people (teachers) who applied, more than we expected and we have to give every applicant a chance and go through their applications,” TSC head of public relations, Betty Wababu, told the media.

The Commission has at the same time released a new recruitment schedule after the earlier one was overtaken by events. In the new schedule, the County selection process and filling of application for employment forms by successful candidates will be done between Thursday October 8, 2020 and Wednesday October 14, 2020.

TSC has already produced the 2020/2021 recruitment guidelines with teachers who graduated earlier and those currently on internship getting an added advantage.

Merit lists have also been dispatched to Counties which will in turn release their respective interview dates and venues. Some vacancies failed to attract applicants and schools have stepped up efforts to get suitable candidates to fill them. In some other schools, only one applications were recorded meaning such applicants are at pole position to clinch the posts.

Applicants expect to be invited for interviews and should get a 7-day notice.

The Commission has set the reporting date for the new teachers to be January 4, 2021. 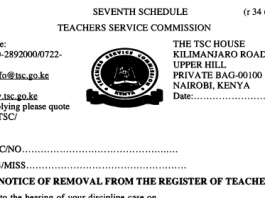 TSC letter on removal of a teacher from the register 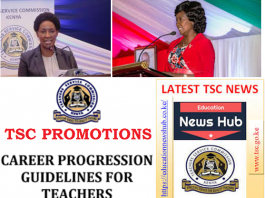 Promotions for teachers by TSC