The Court of Appeal has today ruled in favour of the Ksh10 billion a year tender awarded to De La Rue for printing new generation notes.

The case had been filed by activist Okiya Omtatah who wanted the tender quashed citing that De La Rue should not get a 15 percent preferential treatment.

See the press release by the CBK, after today’s court ruling: 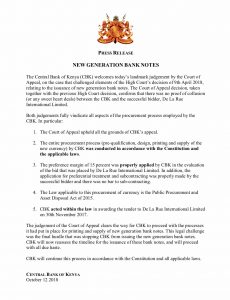 Swedish firm Crane AB was the least evaluated in price score during the bidding process and had expected the CBK to award them the lucrative tender.

Other firms interested in the multi-million contract for printing new generation notes were: Giesecke and Devrient (German), and Oberthur Fiduciaire of France