The Kenya Union of Post Primary Education Teachers, KUPPET, has come out to defend its stand against the recent win by sister union the Kenya National Union of Teachers (KNUT). According to KUPPET, the ruling by the Labour Relations court over teacher promotions would jeopardize implementation of the current Collective Bargaining Agreement; leading to unprecedented reversal in the financial gains accrued to teachers.

Hot news; A list of new allowances and salaries that kuppet wants TSC to give teachers

Below is a presser by Moses Nthurima, the acting Secretary General- KUPPET;

Following the appeal filed by the Teachers Service Commission in the judgment of Petition No 151 of 2018 rendered by the Employment and Labour Relations Court last week, KUPPET has instructed our lawyers to enjoin in the suit in order to protect its members.

The union’s main goal in the suit is to protect the gains under the CBA, signed in 2016, which had been put at risk by the judgment. The court’s orders provided a window for the employer to roll back multiple gains teachers had secured under the 2016 CBA.

The unraveling of the CBA would imperil the union’s leverage in negotiating an expanded CBA for 2021-2025, which KUPPET has already submitted to TSC. Specifically, the union sought better terms, salaries and promotions for lower cadres such as Job Groups J, K, L and M.

In addition, over the last several months, KUPPET has communicated to the employer and the public terms that should apply to teachers under the new CBA. These include harmonization of house allowances based on Job Groups rather than regions of service; risk allowances; over- time allowances; higher commuter, medical, hardship, leave and responsibility allowances; and per-diems for out-of-station work as stipulated in the Human Resource Policies and Procedures Manual for the Public Service, which is applicable throughout the government spectrum.

KUPPET’s overriding mission in this case will be to remove any loopholes for the employer to negatively vary the current earnings of our members and ensure that working conditions for teachers get better, not worse, in any circumstance.’ 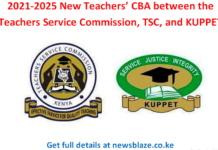 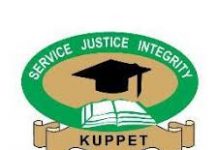