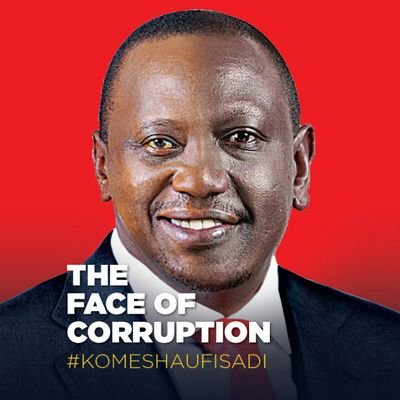 A group of Kenyans has taken the President and his deputy head on concerning the war against corruption. The group took to Social media yesterday where they spread images of amalgamated faces of the President and his deputy with a message urging them to stop the run away corruption vice in the country. Last night, the group went ahead to place the banners and photographs on major toads in Nairobi. The banners were spotted at: Juja Road at Moi Forces Academy, Kiambu Road, Ngong Road, the Cabanas, Kawangware 46 and at the Thika Road tunnel. There is also a campaign against corruption being propagated online dubbed; ‘THE BEYOND ZERO CORRUPTION CAMPAIGN.’

The Deputy President and former Prime Minister, Hon Raila Odinga, have been involved in a war of words, lately, concerning corruption allegations on Dams construction tenders.

Here are the images and banners: