Kenyans have a reason to smile after the Government of South Africa announced the scrapping of short term Visas for Kenyans. Kenyan business and Academia community travelling to South Africa will now be issued with multiple entry Visas valid up to 10 years.

See full details in the presser, below: 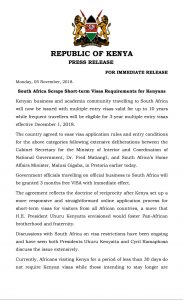