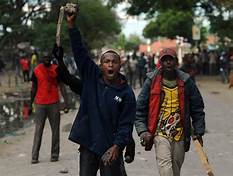 A secondary school teacher was rescued from a charged mob on Wednesday evening at Naivasha town. Identified as Mr. Daniel Mwaura Njoroge, he seemed to have a mental disorder when rescued by a good samaritan. Mr. Njoroge is said to be a teacher at Muranda Secondary school in Murang’a.

The mob was baying for his blood for alleged thievery; a case of mistaken identity. Mr. Njoroge hails from Miharati area which is a location in Kipipiri division, Kipipiri Constituency, of Nyandarua County; Central province.

A teacher familiar with Njoroge said, “I know this guy. I used to work with him, some times back in Gilgil. The family have been informed but they would be happy to get the contacts of the person who rescued him(Mr. Njoroge)”.

Teachers countrywide face a myriad of problems ranging from TPAD, pressure at work, to meagre pay. Schools re-opened on 27th August, 2018, for third term. It could not be established immediately what Mr. Njoroge was doing at Naivasha town.

TSC: The process of interdicting and disciplining a teacher, what happens before, during and after interdiction of a teacher.

TSC: LEAVES, TYPES OF LEAVES TEACHERS CAN BE GIVEN, HOW TO APPLY FOR LEAVES: Special Leave for sports persons