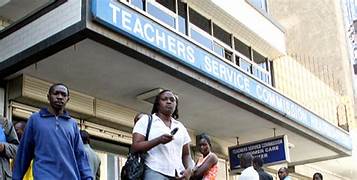 The teachers and by extension the teaching profession in Kenya are in shambles. In fact teaching is becoming un-attractive as days progress. Many teachers are seeking greener pastures elsewhere; from seeking transfers of service to more lucrative positions in NGOs & County governments to flying out of the Country for ‘further studies’. Those still hanging in there are only but victims of circumstances; some have loans with SACCOs and banks, while, others simply can’t afford calling it quits. The restructuring at the TSC and drafting of ‘harsh’ policies have only but worsened things. Indeed, the teachers are a de-motivated lot. They have coined such phrases as: ‘Bora Uhai’, ‘Teach and Go Home’, ‘Shule si Yako’,… among others phrases; if only to find solace from the pain and frustrations they undergo. A number of policies and changes haven’t gone down well with most tutors. Sample these:

Many teachers went back to class; for further studies, with the hope of getting higher perks. This has not been the case, though. In early 2014, TSC froze all promotions pegged on attainment of higher qualifications. A policy that was thought to be short lived became part of the CBA, negotiated in 2017. In the CBA, TSC single handedly developed a career progression policy and guidelines that the commission applies exclusively, at will. In the document, for one to be appointed to head a primary school, it is mandatory to have a Bachelors’ degree and a master’s degree for secondary schools. The TSC seems to be neither here nor there in implementing its policies. It is contradictive for the Commission to require heads to have higher academic qualifications when they have banned school based programmes for such teachers.

The decision to outsource for a teachers’ medical scheme in the name of AON is both retrogressive and oppressive. Teachers forfeited their medical allowances to fund the AON scandal which has turned out to be a cash cow for the few selected, powerful, individuals in this great nation. The Bliss clinics opened to offer medical services under the AON scheme flopped completely! They face a myriad of inadequacies: call it lack of specialized personnel, poor facilities, substandard medicines…I mean, they are just a sham. Safe for the few teachers who have benefited from this scheme, many teachers have suffered irredeemable losses and pain at the hands of AON. On the flip side, some have lost lives due to the sluggish nature of AON in responding to emergencies and approving treatments. This is crime against teachers, and it must be stopped at all costs!

When the new CBA came into force,  last year, many newsrooms shouted themselves hoarse with headlines like…’Teachers smile all the way to the bank’….This was just a Public Relations exercise by the TSC. Fact is, many teachers got an increment of a paltry Kshs. 1,000 to 2,000, and it is good to state here, before tax. This is ridiculing the teachers. What most teachers may not be aware of is the hard fact that their grades were downgraded; in the pretext of introducing a new grading system. For the record, no new grading system was introduced. The teachers were duped! Their job grades were drastically downgraded (compared to those of civil servants and TSC Secretariat) after the SRC’s biased job evaluation exercise.

The decision by the TSC to introduce a new evaluation system (TPAD) has turned teachers into secretaries and cyber café ‘cockroaches’. The teachers are expected to file a large number of hard copy documents, compute the data and feed it into an otherwise inefficient online portal. It is a real burden to balance between preparing for lessons and filling data on archaic manual sheets. The evaluation itself is too subjective to be depended on for meaningful action.

In short, teachers have been reduced mere observers in the whole circus. Circulars are released now and then; and most of them spell doom to the teachers. An employer who is always on a fault finding and victimization mission does not mean well to its employees. It is sad that the employer wants to raid the meager earnings of teachers by forcing them to pay heftily for in-service trainings! An employer who is yearning to punish minor oversights like forgetting to remark on TPAD does not have the interest of the employees at heart.

Unions have come out to strongly oppose the high handedness by the TSC. In a statement, KNUT secretary general has castigated the move by TSC to dictate on composition of the forth coming negotiation team.

A change of heart by TSC is desired. And may it come fast, enough, before it is too late!

Schools told to reduce costs of uniforms for students