A principal in a senior boys’ school in Nyamira county, Manga Sub-county, is on the spotlight for chasing form four candidates from school. The 21 form four boys who are to sit their KCSE exams next month have been out of school since May, this year.

The boys were nabbed after sneaking out of school to watch a Secondary Schools’ Sports championship at a neighboring school. Tough punishment was meted on the boys who were asked to bring a roll of barbed wire, 3 posts, 3 kilos of nails, 3 bags of cement and chain link. The principal has remained adamant on suspending the boys even after their parents delivered the said items; as punishment. As a readmission requirement, the parents were forced to clear the whole year’s fees, before the principal sent them away with their students.

One of the students, Adelbert Ogachi of index number 042 and admission number 6564, has been unable to access his Agriculture project. With the KNEC Online project marks’ submission portal almost closing, the traumatized boy is left helpless and is staring at getting an X at this year’s Kenya Certificate of Secondary Education (KCSE) exams.

“I have visited various offices across the county. I have written several letters seeking help. There is no forthcoming assistance. It seems the principal is untouchable. Am afraid my son my not get his KCSE results if he does not write his Agriculture project examination”, said Ogachi on phone.

The stranded father is now at cross roads on the next course of action. 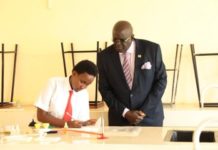 Education CS George Magoha launches a nationwide mop up exercise to find about 150,000 KCPE 2019 graduates who have yet to enrol in Form... 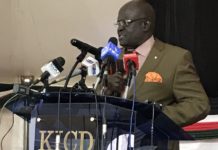