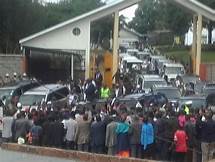 “This is despite the fact that the County Service Board confirmed that the teachers were recruited procedurally  and therefore deserve communserate benefits”. Adds Nyamoko. The speaker regrets that the teachers are parents, husbands, wives, brothers and sisters who have numerous financial responsibilities to shoulder.

In what is seen as a sign of hope to the teachers, the County Assembly has made deliberate efforts to resolve the issue and has come up with the following recommendations:

KUCCPS yet to open portal for revision of courses, Magoha tells...