President Uhuru Kenyatta today at State House, Nairobi held a virtual meeting with Senior Ranks of the Executive that included Cabinet Secretaries, Chief Administrative Secretaries and Principal Secretaries during which he outlined Government development priorities for the 2020/21 Financial Year which kicked off on 1st July.

In his address, the President said Government’s focus this Financial Year will be the implementation and completion of ongoing Priority Projects and Programmes as set out in his Administration’s Trans-formative Agenda for the Nation.

These Programmes, the Head of State said must be strictly implemented within set timelines and budgets.

The President reiterated his earlier directive that no new Projects will be initiated except with his express authority.

As a measure of accountability, the President announced that completion rate of Projects and Programmes will be adopted as a key Performance Indicator for all Cabinet Secretaries, Chief Administrative Secretaries and Principal Secretaries.

The Head of State called for Collective Responsibility in the implementation of Government Projects and Programmes through the involvement of entire Ministerial Establishments (Cabinet Secretaries, Chief Administrative Secretaries and Principal Secretaries), so as to ensure timely delivery of quality outcomes.

The President said Collective Responsibility should be demonstrated by enhanced presence and visibility of Government on the ground through inspection of projects and robust public engagements.

The Head of State acknowledged the current difficult economic environment occasioned by the Covid-19 pandemic and reminded Government Departments to settle pending bills as a key priority and to ensure that pending bills is the first charge on each Ministry’s Budget.

In support of local industries, the President said the Government must walk the talk of Buy Kenya Build Kenya agenda and once again, directed all Ministries, State Departments and State Agencies to give preferential procurement to Kenyan Made Goods and Services.

In conclusion, the Head of State warned the Senior Ranks of the Executive against corruption and malfeasance saying there’s no room for the vices in his Administration. 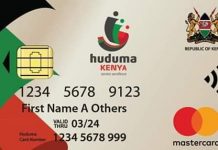 Choose where to pick your Huduma Card, through SMS 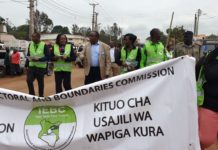 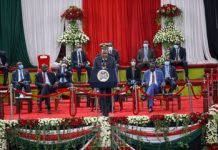